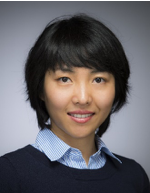 Yanyan Xie (S’18) received the B.S. and M.S. degrees in electrical engineering from Xi’an Jiaotong University, Xi’an, China, in 2009 and 2012, respectively. Since 2017, she has been working toward the Ph.D. degree in the Center for High Performance Power Electronics (CHPPE), The Ohio State University, Columbus, OH, USA. From 2016 to 2017, she was a Ph.D. student with Oregon State University, Corvallis, OR, USA. From 2012 to 2015, she was an Electrical Engineer with China Southern Power Grid Company Limited. Her research interests include electric machines, power electronics, and power system engineering.

Franco Leonardi (M’96 - SM’19) received the M.S. and the Ph.D degrees in electrical engineering from the Università degli Studi di Padova, Padova, Italy, in 1991 and 1995, respectively. From 1994 to 1996, he was a Research Associate at the University of Wisconsin-Madison, where his research focused on Doubly Salient PM machines. Since 1999, he has been with the Ford Research Laboratories, Ford Motor Company, Dearborn, MI, where he has been involved in the development of hybrid electric vehicles. He is currently the supervisor of the Electric Machines and Power Electronics Research team. He has authored 28 US patents and 30+ international publications that received 1800 citations.

Alfredo R. Munoz (M’93-SM’06) received his B.S.E.E. from Technical University Federico Santa Maria, Valparaiso, Chile in 1981, and the M.S. and Ph.D. degrees from the University of Wisconsin-Madison in 1995 and 1999, respectively, all in Electrical Engineering.

From 1981 to 1986 he was with Schlumberger in Europe, Middle East and South America. From 1987 to1993 he was a Professor at the University Federico Santa Maria. In 2005, he re-joined Ford Motor Company at the Research and Innovation Center in Dearborn, MI, USA, where he currently is the e-Drive System Supervisor. He has co-authored more than twenty technical papers, twelve technical reports and holds fourteen US Patents.